NOTE: This article has been superseded by my more recent one here 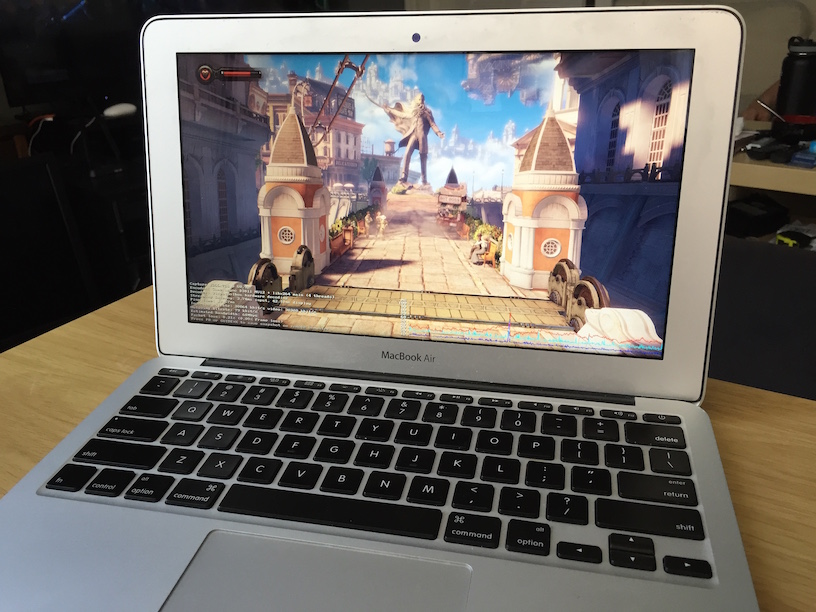 You might have tried a service like the now defunct OnLive. Though personally I’ve played and beat many AAA games on the service, it unfortunately a) had a very limited selection and b) is now gone. I also have a bunch of games on Steam that I’ve played using my eGPU. With the new Macbook though, I won’t be able to continue my low-end-laptop but high-end gaming extravaganza since there’s no Thunderbolt. So why am I not concerned? Steam recently introduced In-Home Streaming, which basically creates a mini-OnLive in your own home with all the same Steam games I played with my eGPU. But… let’s do it over the Internet!

Playing games this way is actually quite economical – especially when comparing to purchasing a full-on gaming rig. Here are the costs you’ll need to consider:

This is all fun and games, but you need to make sure of two things:

While playing, make sure to hit F6 to see the latency graph. Anything above 50ms will make the delay somewhat noticable, though I’ve played with delays up to 100ms. It just takes some getting used to and before you know it you won’t even know you’re streaming your games from a computer far far away.

One other thing you should do is hit F8 while playing (note that sometimes this will cause the client to crash, but the file will still get written). F6 will do a dump of stats in the C:\Program Files (x86)\Steam\logs\streaming_log.txt file on the server. Open it up to see detailed latency timings. Here’s an example of the interesting lines:

Unfortunately Steam doesnt support pulling the video from the H264 encoder on the GRID’s NvFBC (which would reduce AvgEncodeMS a bunch). If you were running a GTX video card locally this is one thing that’d make it faster than using EC2 (in addition to largely decreasing NetworkMS).

See more information about this file in the Steam In-Home Streaming Steam Group.

If you have a) a fast internet connection and b) you’re near an AWS datacenter with GPU instances, in my opinion, this is actually quite practical. Not only performance-wise, but it’s also quite economical.