Note: This is a repost of my TechInferno Forum article from July 28th, 2013. Methods have changed and are somewhat easier these days. Make sure to check out that forum for more info.

TLDR: By buying around $250 in commonly available parts, plus a video card, you can make the graphics of your 11” Macbook Air from 5X to 7X faster. Demo video at end of post. Step-by-step, here’s how to exactly do it. Warning: not for the faint of heart!

This is my third article here on this forum, though it’s the first that the process can be done by anyone with off-the-shelf parts. No more discontinued exotic parts like the $180 BPlus TH05 are required. All you need is a macbook air, a graphics card, a power supply, Windows 7, and ~$250 to buy some adapters and software online. All these parts are readily available for anyone.

Like usual, I really want to thank nando4 for his help in doing all this. He’s the mastermind behind the technicals, I just like writing articles and making stuff easier for everyone. He’s super dedicated and eGPUs wouldn’t be anywhere near where they are today if it wasn’t for him! Thanks!

So what are we doing? We’re going to make a Macbook Air accept an external video card via Thunderbolt! Yes, you might have read in the news that real commercial solutions are just around the corner. We’ve been promised by these companies over-and-over again, with youtube videos, hands-on reviews, press releases, etc, but nobody is releasing anything. It’s been like this for over a year. Intel even openly admits its bias against GPU usage where it’s listed as unsupported in their Thunderbolt Certification Application. Talking to one of their thunderbolt guys, here’s what that “Not Supported” means:

So with the bad news out of the way, the good news is that you can still do it yourself – just a bit less elegantly. We’ll be using the Sonnet Thunderbolt to ExpressCard adapter, together with the BPlus PE4L ExpressCard to PCI-Express adapter. This PE4L adapter also includes a Delayed PCI-Reset jumper, making Windows 7 + Internal LCD rendering possible on the Macbook. Also, it’s not that bad. As you’ll see by the benchmarks later in the article, yes you’re only running at expresscard 5Gbps x1 2.0 PCI bus speed (as opposed to 16X 2.0 on a proper PC and only half of Thunderbolt’s 10Gbps), but its WAY WAY better than the internal integrated graphics of the laptop, plus you can still max out tons of games. The full PC bus speed is super rarely used anyways, so it’s not like you’ll get 1/16th the performance.

As part of this tutorial, we’ll be using Windows 7 BIOS (installed the regular Bootcamp way). Things are possible in Windows 8 as well, but the instructions differ, and I’ve also had troubles getting Internal LCD rendering working on Windows 8. Yeah I’m not a fan of using legacy Windows versions either, but whatever, every game works on both OSes for now anyways. Oh and we’re using Windows because games only exist for it, and I can’t get the setup to work on OSX (haven’t tried too much though).

PART B: Putting together the eGPU and understanding the problem

PART C: Getting rid of Error 12 on this Windows 7 (BIOS) install

Cutting to the chase, benchmarks are below. It’s insanely fast because the MBA LCD is 1366x768, it’s a 15W i7-UM Haswell CPU that is on par performance wise to a high end 35W Sandy Bridge i5 CPU, plus a crazy video card. Woo! :D 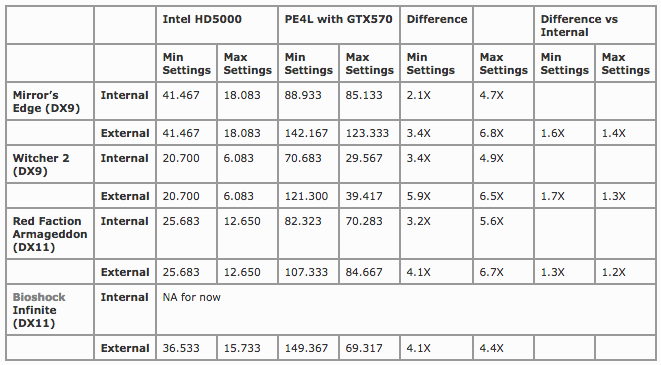 A decision you’ll need to make is if you want to plug a monitor into your video card or just use your laptop’s monitor. Each has it’s own pros and cons. You’ll get faster performance with an external monitor, but you’ll lose the convenience of not needing a giant monitor. This becomes relevant as people make better eGPU cases where your eGPU will be portable. Why bring a monitor to your friend’s place when your laptop already has one?

It’s actually kind of cool that you even get this choice. The way it works is by the NVidia Optimus drivers taking the video frame memory from the video card, piping it back over the Thunderbolt bridge to the Intel HD 5000 memory and overwriting Intel’s memory so that you see the eGPU’s output on the Intel LCD. Cool! If you’re curious, this is the exact tech that’s used when laptops have an NVidia internal discreet graphics chip.

It has become very clear that gaming is not only high-performance, but super practical on an 11” Macbook Air. There’s so much going against it: this hodgepodge of adapters, it has a low voltage CPU, disaster of wiring and exposed sensitive parts, crazy boot-time chainloading software, Intel killing companies producing adapters and products left right and center via legal threats, etc. but somehow, with the right parts and some patience, it works spectacularly. And is quite cheap too!

Again I want to thank nando4 for all his help in working with me tirelessly over the last few months to get this working. Also, thanks goes out to TechInferno and the community thats been built here for allowing people to help eachother so efficiently. If you have any questions/comments, please feel free to reply to this thread.

Thanks everyone – have a great day! And enjoy gaming, I hear PayDay 2 is awesome too :D 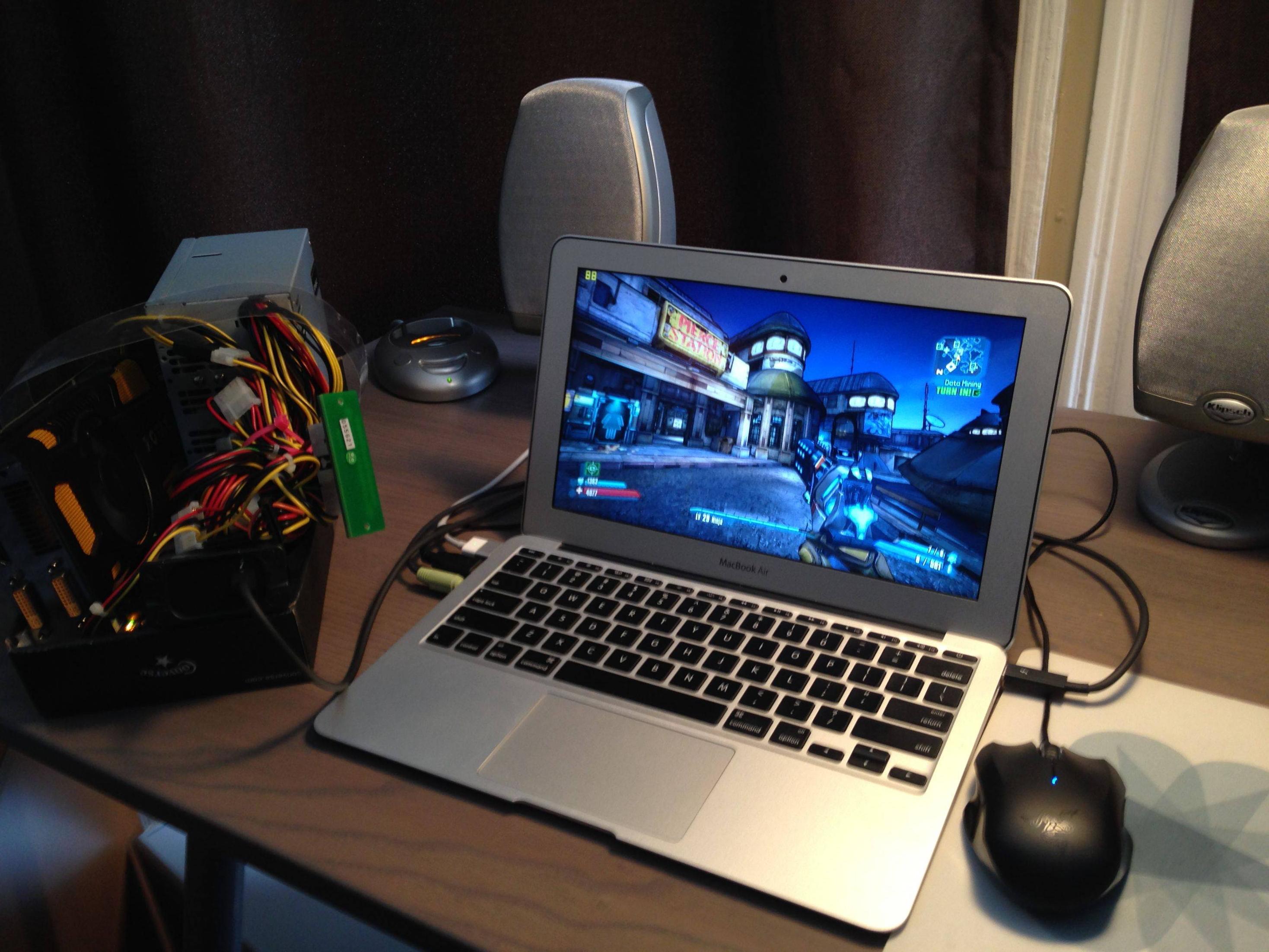 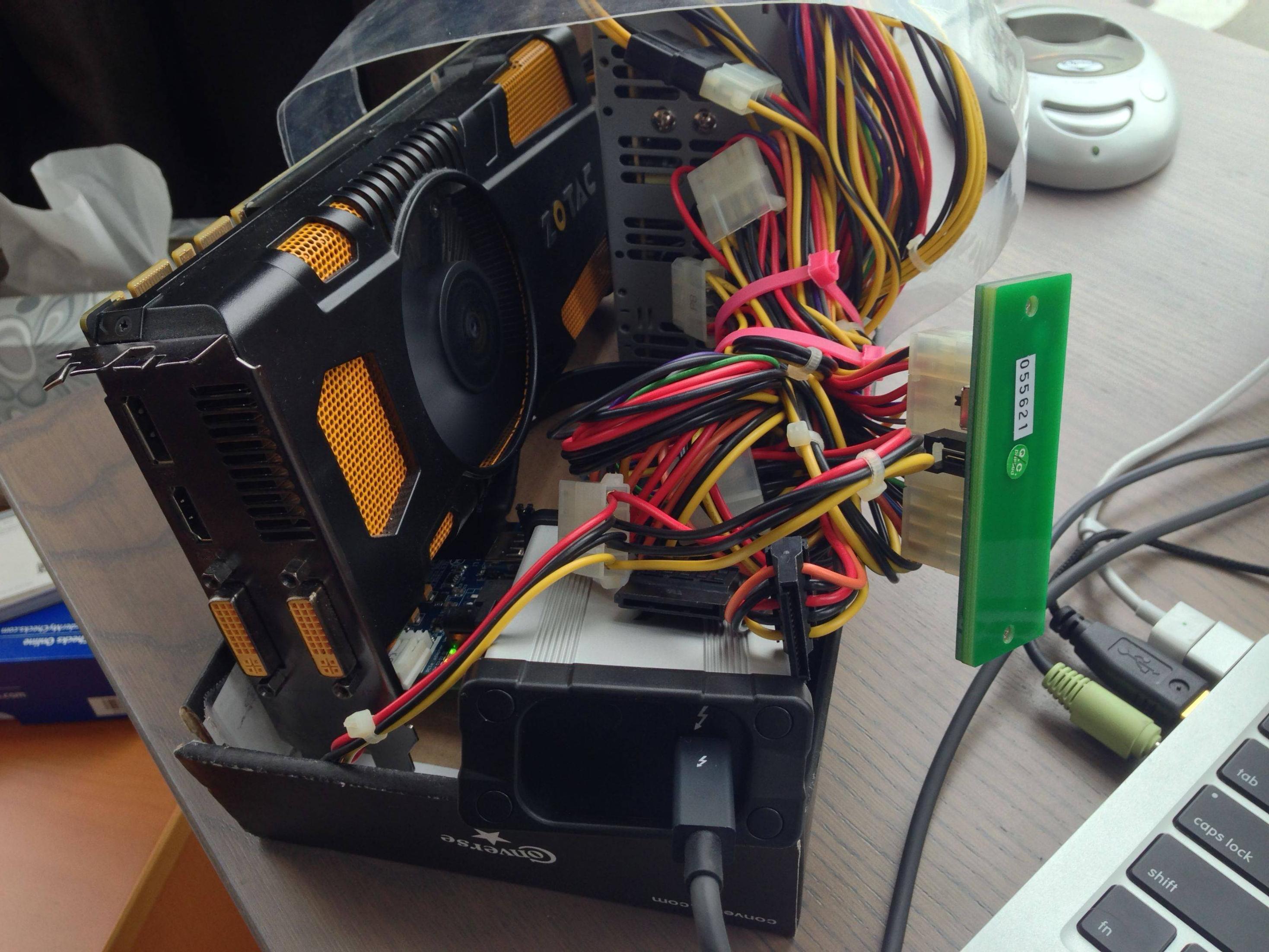 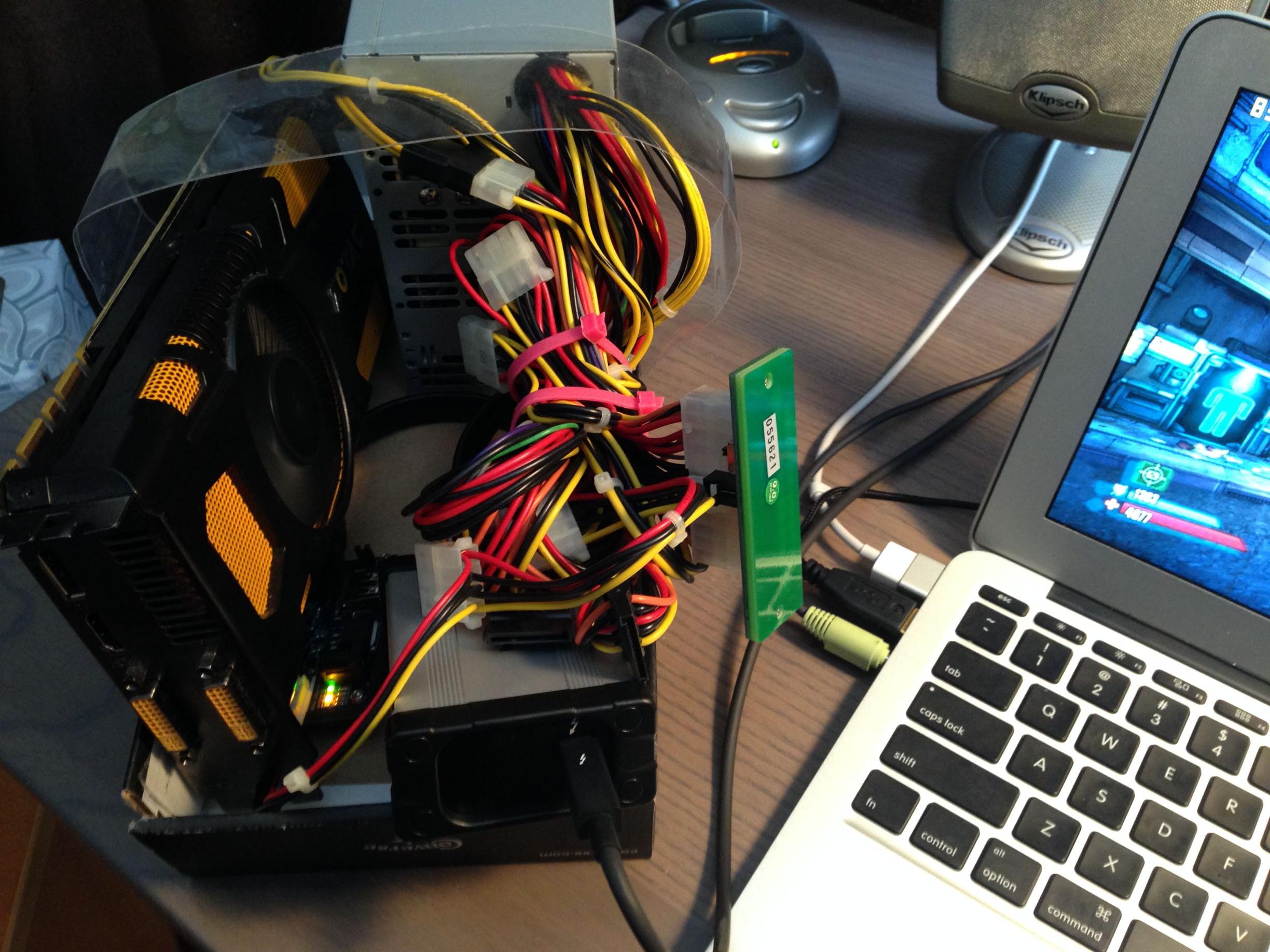 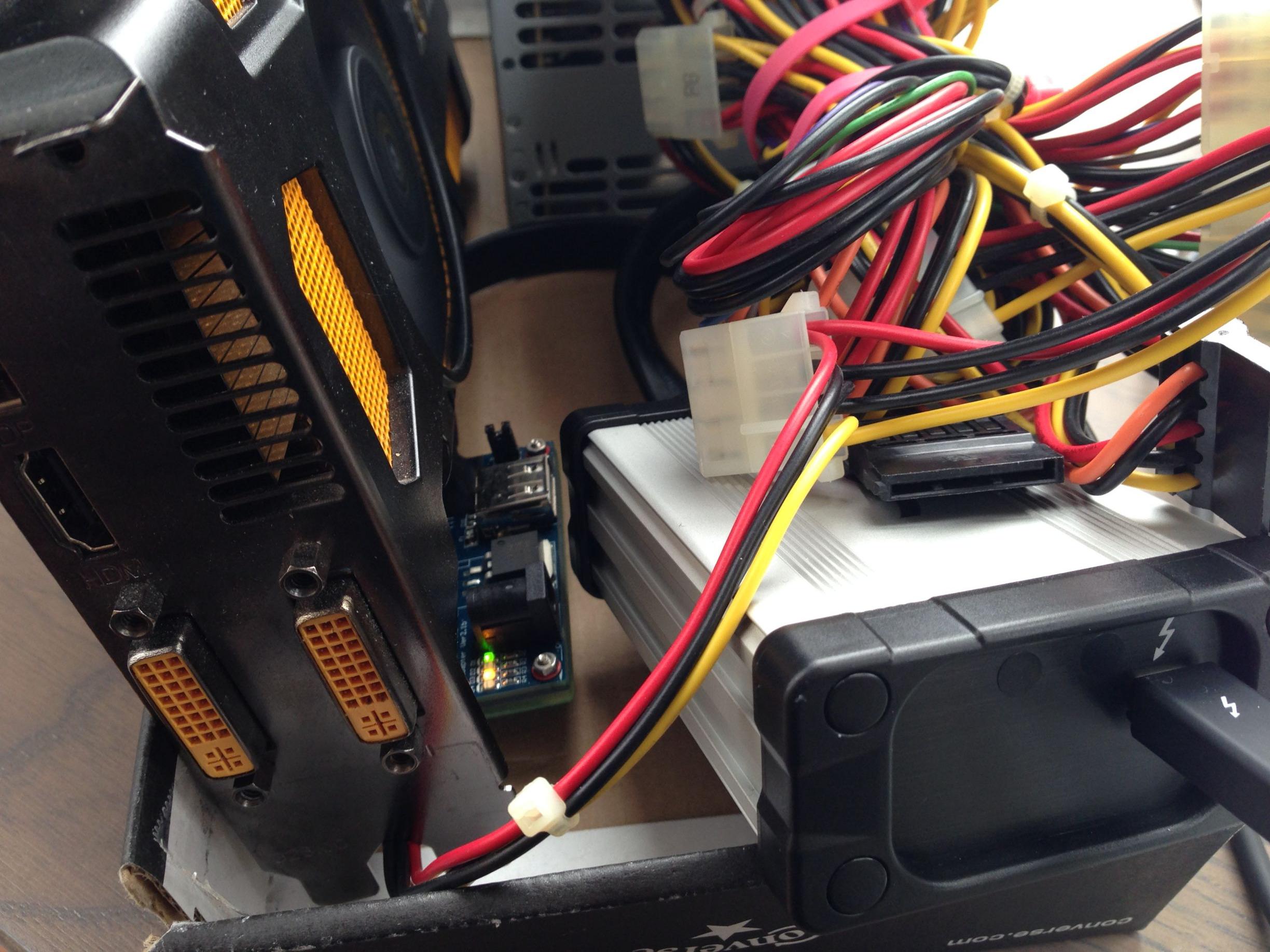