So unless you’ve been living under a rock, you should have heard that WWDC announcements were today. Apple announced all sorts of goodies like new Macbooks, new version of iOS (including an ugly-ass Maps app), and some other stuff. I normally religiously watch these keynotes because I consider it to be an experience (much like watching a sporting event for normal people). One thing I’ve ever heard about but never actually tried, is to “watch it” live via Live Blogs. Its not the same experience, but sometimes it just beats waiting for the real videos to get posted by apple (here). I think Apple has only ever once streamed the announcements live. My guess is they stopped because of the powerful Blogger Lobby insisting they get some sort of exclusivity. Or maybe not. Maybe it’s the Akamai bills. I dunno. But anyways.

As this was a new experience for me, I did a Google search for people doing these Live Blogs. I was expecting some text document that I’d need to manually refresh, but it appears as though technology is getting better where sites are streaming text in, with formatting and pics inline, pause ability, lions and tigers and bears, oh my! So, I’ve reviewed the ones I found so you can place bets with your friends next time as to which “is the best”. So here you have it: 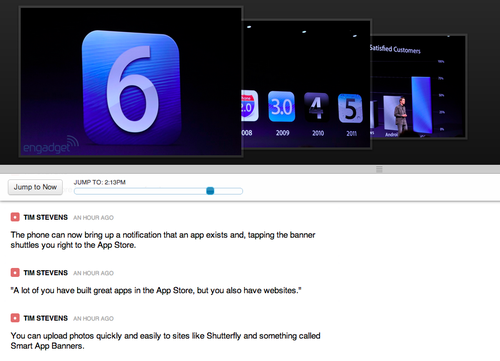 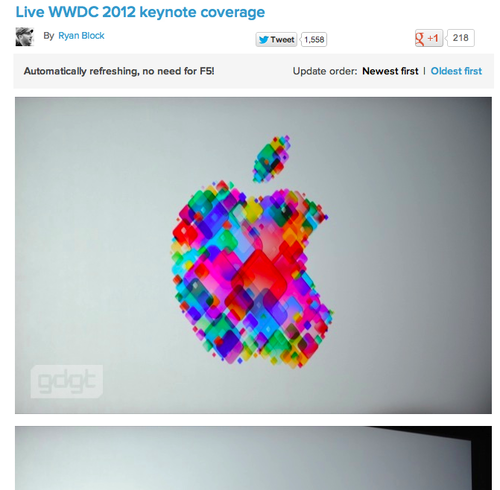 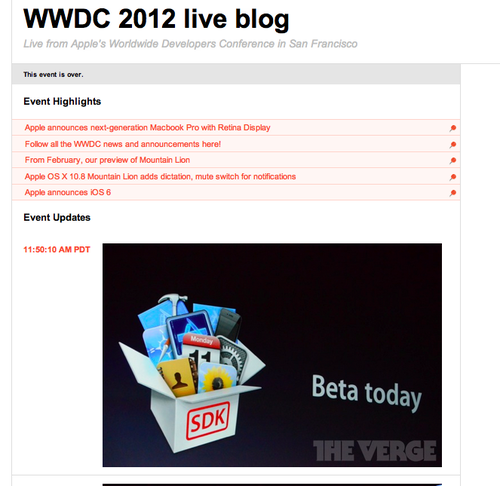 My favorite overall was The Verge as it was the best (it was the fastest at giving me the best information with big pics and good text). It had some UI issues, but so did all the others. My Fave might have been Engadget if it wasn’t for the need to manually refresh the page, but hopefully they’ll fix that for next time. But I’ll need to test it in the Full Experience before outright saying it would be better.

Overall, they were all excellent. I thought live blogging was this lame thing that’s delayed and burdensome. But it’s really quite awesome. I’m happy there’s so much competition as we got 4 great competitors here and dozens more online. Now you can have less stress too picking your live blogger next time!

Ok I can’t believe I wrote this article, but there you have it.

Btw, it sucks that Apple didnt make a retina screen for the new Airs. Now i need to lug a high-res heavy-ass brick everywhere. #firstworldproblems i guess.